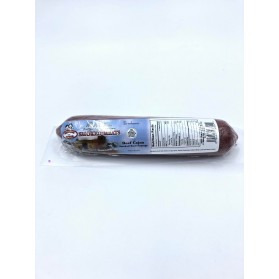 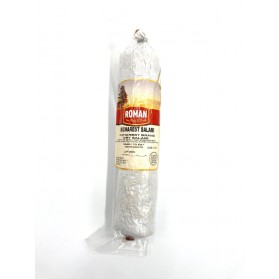 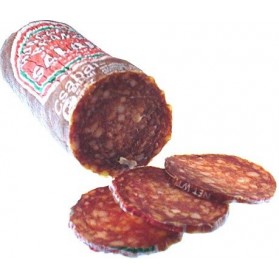 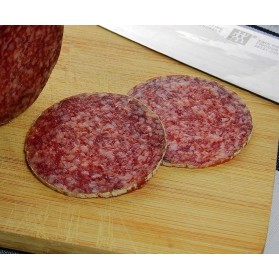 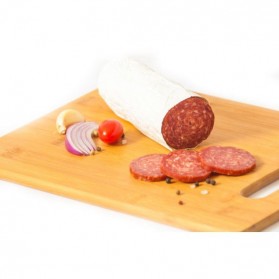 Salam de sibiu  (winter sausages) is a Romanian deli made with pork's meat, pork's fat, beef, salt, and condiments.
$18.99
Out of stock 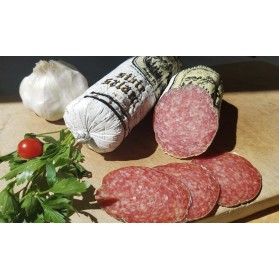 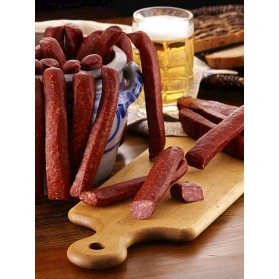 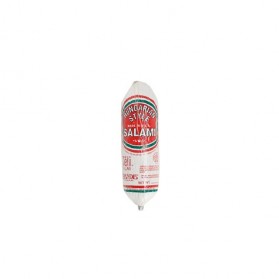 Hungarian Style Teli Salami is prepared according to a traditional Hungarian recipe. It is made from local, American pork and has a mild, smoky flavor. It is perfect in all kinds of sandwiches, paninis and on pizza.  Vacuum Packed, 1 piece , Approximately 0.75 lb
$15.99
Add to cart
Showing 1 - 8 of 8 items

Hungarian salami is a dry, long-maturing, and crispy sausage which was originally developed in Italy. However, the Hungarians mastered its production very quickly too. While many believe it contains donkey meat, it's routinely pork. And sometimes poultry, horse, or venison. On the website of our store, you will procure mainly original Hungarian salami. As well as regional versions like Csabai, Rakoci, and Bathory Szalami. Hungarian products are considered the best. Chiefly because they are strongly seasoned with paprika, among the other spices. We also have these meat victuals produced in other countries of the Old World. Polish versions like Hetman pork sausages or Sokolow sausages should be definitely mentioned here. And also the Stiglmeier Landjager sticks. These types of cured meat are also a popular travel lunch. They can be an appetizer or a quick snack. They taste best with horseradish or hot mustard. In Europe, they are customarily served for breakfast with the addition of bread.

European salami belongs to the longest usable and expensive cold cuts. The most superior brands have a white mold bloom, the taste, and the scent of cardamom. The most desirable come from Bologna, Milan, and Hungary. Only one specific version is produced in Italy with donkey meat. The Fabko online store can offer you tourist brand kielbasa, Hungarian Beef & Pork Szalami, and Romanian Brand Pork&Beef sausages. All these victuals are the result of hundreds of years of tradition in the production of cold meats in the Old Continent. Why are they worth to order and examine them? Because they represent flavors you won't find in America. Meats from across the big pond are famous for their quality and nutritious ingredients. Moreover, this type of salty and dry meat can be stored at high temperatures even once cut. For these reasons, it was a kind of food willingly produced and frequently eaten in the lower social classes of Europe during historic times.

Hungarian salami is one of the most popular and most renowned meat products in this country. It is also a delicacy that everyone rapidly associates with the Pannonian Basin. Why is it so popular? After all, Poles, Romanians, Czechs, and Slovaks manufacture these cold cuts too. Well, none of them are as original and deliciously seasoned as the products from by the Danube. There, the local tradition of salami production dates back to the second half of the 19th century. Presently, its leading position among culinary exports proves its sensational recognition among gourmets. It is one of the few products that has stood the test of time. Pick, Teli, Csabai, or Rakoczi. All of those original Hungarian salami pieces are the frankly high class among European meats. They can be slightly dry or mild, but always very characteristic in taste. When we slice them into thin pieces, they taste great, for example, on sandwiches or pizza.

Hungarian salami still is victual that people living by the Danube produce according to the hundred-years-old recipes. Its characteristic feature is a white mold bloom that enriches the taste of the sausage. And also the red color, which is the result of the high content of paprika, usually very spicy. Hungarians manufacture their cold cuts both in the huge brands and the small, family-owned factories. Salami customarily matures in three months and owns its unique aroma to smoking in the beech smoke. Budapest’s citizens most often choose salami for breakfast. The product works well as an addition to sandwiches, salads, and pasta. Besides, true connoisseurs eat them separately. It is also a great packed lunch, thanks to its dryness and long shelf life. If you want to try this extraordinary delicacy straight from the heart of Europe, there is no better place than the Fabko online store. Feel free to browse!